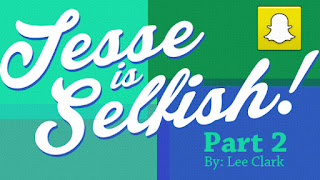 When we last left Jesse, he was being selfish. Consuming media when he wants, when it's convenient for him, and doing so based on his own availability among his preferred outlets. Nice, Jesse. Thanks for making it difficult for manufacturers or retailers of consumer products to reach you! Okay, off my soap box. In my last installment I told you that we CAN reach Jesse. And, I promised to tell you how. Remember I explained that you need to reach out to Jesse, and hopefully influence him, without interrupting him and on his own turf? This makes for less invasive marketing by affording you the greatest chance for success (you'll become less of a "throwaway" by taking this approach). I believe I also mentioned that Snapchat is Jesse's preferred social media platform. That said, I'm going to provide you with an example of non-invasive marketing.

A regional event recently took place. The event organizers created their very own Snapchat geofilter. This filter was made automatically available to event-goers within a certain geographic radius (parameters are set by geofilter administrator/purchaser). Many SHUs (super heavy users) are very familiar with geofilters, and stories on Snapchat and so they're aware of how they work. Basically, when you're within a certain radius you'll be notified that a geofilter for a specific event is available. Users can choose to select and apply the filter to their own images or stories (stories expire within 24 hours, photos are typically visible for 10 minutes or so depending on the settings you choose). One of Jesse's friends (they're connected on Snapchat) utilized the event's geofilter and Jesse saw it. It quickly got his attention. In an instant Jesse knew his friends were out having fun, and he knew they were having fun at this event! Jesse was informed in a way that was non-invasive, that was relevant and interesting (to him). To learn more about other methods, tools and tactics to reach Jesse, contact Lee at Nye & Associates: 316-263-5878.

This concludes our Jesse is Selfish series. Check back soon as we tackle an issue that most company owners, CEOs, Presidents and CMOs face: educating and equipping the folks who sell your products, for you.

By Lee Clark, President
Nye & Associates, Inc.
Posted by About Us at 11:30 AM No comments: